The S word and why I won’t use it 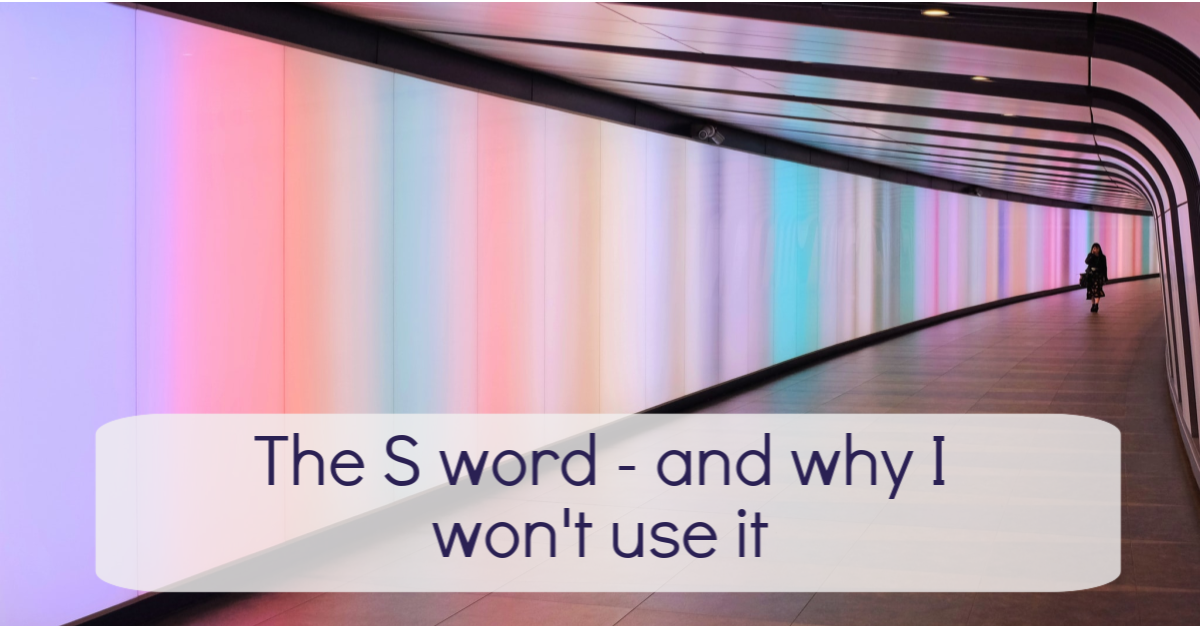 There’s one word that I will always challenge the use of – on and off-line. What is it? The S word. And here’s why!

As time has gone on, I’ve got braver about challenging people on social media when they share something I view as unacceptable.

Are you the same?

But one thing I’ve always challenged is the use of the S word.

This is a word that has always wound me up.

It’s a word that I’ve not allowed my children to use – and I’m so sad that it’s used glibly in TV programmes aimed at children – in fact there was a childrens’ programme that had the S-word in the title… hideous!

But it’s only recently that I’ve been able to really articulate what it is about this word that bothers me so much.

The use of this word is HUGELY dismissive and judgemental.

I got asked in one conversation – ‘what’s wrong with being judgmental?’

Most of the time when we;’re being judgmental, we have absolutely no idea of that person’s story, what has led them up to that point.

Even if we do know some of it, we likely have not experienced what they have, nor do we have the memories and inner stories and external pressures that they have.

We have our own.

So what, then – gives us the right to turn around to that person, put ourselves in the position of judge – and pass comment (or worse) about something to do with them?

In being judgmental, we’re saying ‘I know better than you’.

But how can we know better than them? We’re not living their life?

How many times have you heard someone pass comment about someone else’s parenting when they’re not even a parent themselves?

How does that build up the person they’re talking about?

How does that enable the person they’re talking about to give more love and support to their child?

I think that, if we ask ourselves, being judgemental stems from a feeling that we have of our own.

I was taught a long time ago that in an argument with someone we can stop it descending into a slanging match by ‘owning’ our feelings. For example, if I say ‘I feel really worried about …’ – no-one can argue with that because that’s my personal feeling.

However, if I say ‘this is wrong’ – then that is, of course, open to debate.

How about, when we’re feeling judgmental, we stop for a moment and see what we’re really feeling?

If we’re honest, when we feel like commenting, or responding to a story we hear – our response comes from feeling angry, or upset, or disappointed, or afraid. Or plain just not understanding how something could happen.

But does that give us the right then to turn around and make a dismissive, sweeping statement about the person or people concerned?

Does it give us the right to use the S-word?

I get really worry when I see it being bandied about by people in positions of influence – such as coaches who spend so much time building their personal brand online.

People look to coaches, mentors and teachers for advice and guidance. In my opinion, these coaches, by being dismissive themselves are encouraging

others to be dismissive, rather than taking a step back to try and understand things from someone else’s perspective?

Do we really want to hear more heart-breaking stories of 13 year old boys taking their own life because they’ve been bullied about their sexuality, or any other aspect of their being that someone else has decided is not acceptable?

It has EVERY relevance!

The people that bully, that make children feel their lives are unlivable, didn’t come out of the womb acting that way. They were influenced – by family, friends, peers, the media.

And today, more than ever – we are the media.

The power of influence leads to people responding to something they don’t understand, or are scared of, by wanting to destroy it.  Isn’t that how wars start?

Just imagine –  if people were influenced to be curious instead of judgmental, how different could our world be?

This issue gnaws away at my head. I’ll continue to challenge use of the S word when I see it and hear it and I hope that, by sharing, you’ll understand why.

Oh and what is the S word?

PS. No human is actually stupid. We’re all innately smart. Goes with the species.

We use cookies to ensure that we give you the best experience on our website. If you continue to use this site we will assume that you are happy with it.OkPrivacy policy