Notice: Trying to access array offset on value of type bool in /www/wp-content/themes/Divi/includes/builder/functions.php on line 2799 The power of words - 4 examples of influencing reaction by choice of words - Julia Bramble | Bramble Buzz 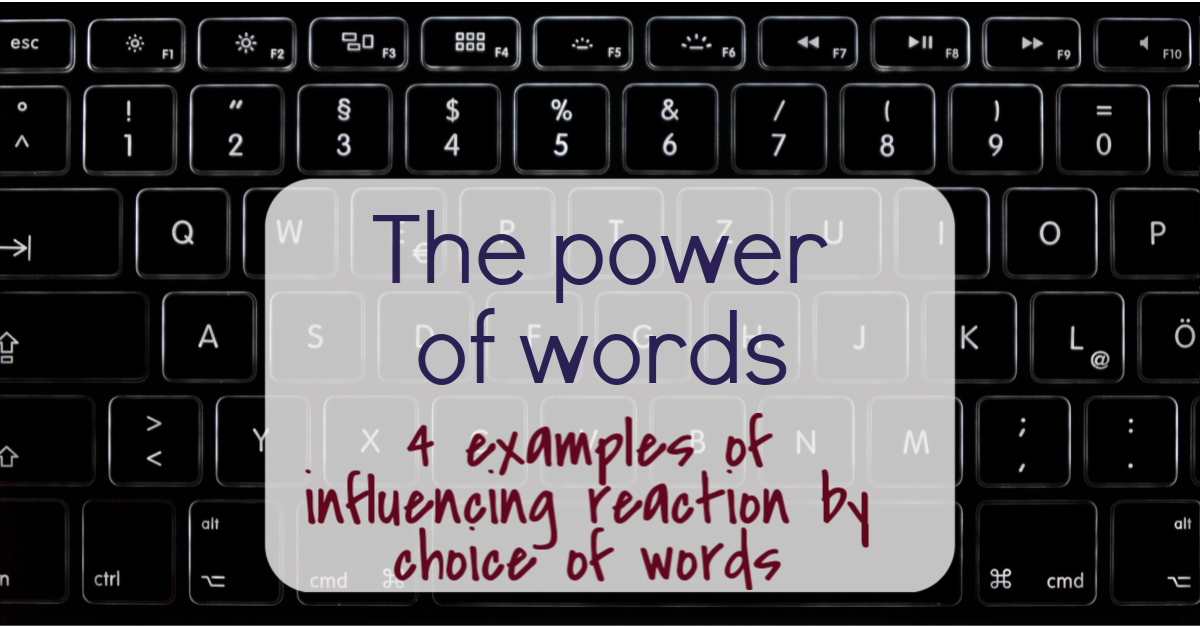 Words, They’re so powerful. Sometimes we forget just how powerful they are. Sometimes we just pick up a few words and fling them together to get a social media post, or blog or email out there – only to discover that this may have had an impact for all the wrong reasons.

Because, used on their own, there’s an inherent problem with words – we choose and put them together based on our context – but then we lose control of them – because the interpretation of them is all down to someone else’s context.

Facial expressions and body language have of course been around for a lot longer than words – and they often give the extra context our words so often need.

But unless we’re going to create video for every single communication online, we still have to depend on words – without those niceties. A lot.

Which means we have to be aware that, no matter the intention we put behind our words, someone else may take a very different meaning from them.

This is especially true of words that could have a negative connotation – and also those that could be disrespectful to other cultures.

What wouldn’t even occur to us as a negative overtone could trigger exactly that response in the reader..

And the problem, of course, with unintentionally inspiring a negative reaction in your reader is that the true meaning of the message you intended to share is now swamped by emotion and potentially ignored.

And even more importantly, you have unknowingly upset or annoyed someone.

That’s obviously not great for the relationship-building we’re all putting so much energy into in our marketing!

We would hope that, in a longer document, the phrases and sentences surrounding our words would build up a picture of our intended meaning.

But when it comes to social media – and especially quick tweets, or comments to others added on the fly, we may not have the opportunity to couch our words in extra context.

It therefore pays to take just a minute or two to put yourself in your readers’ shoes and to check that you’ve chosen the best words to say what you want to say, with the least chance of triggering an unintended negative reaction.

To explain a bit more about what I mean, here are four examples of words or phrases that I’ve either seen posted online, or thought better of sharing myself.

This one gets shared all over the place – and frighteningly often. But the problem with using this word (and those like it) is that it is dismissive.

Very often the word is used when someone is actually referring to another person’s opinion. But because they don’t like the opinion, they dismiss the person as being stupid. This shows a complete lack of respect for the other person, and a lack of willingness to understand where they’re coming from.

Sometimes the word is used about a group of people who somehow don’t match up to someone else’s ideal. This implies that the world according to the accuser is the only one with any value. Using the ‘stupid’ word shuts down any potential discussion about it. To many, it says ‘I’m right, my way of doing things is right, you and yours aren’t.

I was shocked to see most of the population of Western countries being described as ‘stupid’ in a newspaper article (in a well-respected paper) recently. We were being called that because of our apparent attitude to climate change (not that I remember being asked for my opinion on the matter by the author, but that’s part of the problem with these sweeping statements.)

I guess it wouldn’t have been so bad, but the author was trying to win support for her cause – lobbying politicians to get something done about our climate issues. I would suggest that dismissing the majority of your audience by calling them stupid isn’t the best way to motivate them into action.

2. Respond to what’s been shared with empathy

So many people see a post online and, instead of just responding in a supportive way, suggest how that person could have done it ‘better’ or differently. (I have to ask myself – would we actually respond like this in real life?!)

This one is an example that happened to me recently. It didn’t upset me per se, but it did give me a jolt of ‘oh – wasn’t expecting that!’

So I shared on Facebook a photo of 6 peppers that I’d carved faces into – and then stuffed, as a Hallowe’en tea for my kiddos. I was pretty proud of my handiwork – so when I shared the photos I was expecting comments back along the lines of ‘ooh those look great’ or whatever.

So it surprised me to get a comment back from one of my friends who shared a photo of a pepper cut differently, telling me that mine would have been better if I’d cut them their way – as they’d have looked spookier.

Well, that took the wind out of my sails. Not a lot – but it did.

So if there is someone you’re trying to build a relationship with on social media – and you want them to feel good about you – try making sure that you tap into where they’re coming from when they post.

If they’re sharing some great news, they probably want congratulations; if they’re sad or something bad has happened, they want sympathy and/ or support (note – very seldom do they want to know how they should have done things differently.)

And if they’re sharing something that they’re proud of – they want praise – they don’t really want to be told how they could have done it better!

On their own, examples like these aren’t a big issue, but if you don’t know someone and you’re using online to build the relationship, then repeated responses that don’t show any appreciation of the mindset behind the original post won’t help your cause.

3. Avoid making someone feel like they’re put on the spot in public

If we use phrases like ‘Did you know?’ in some circumstances it can result in the reader feeling a bit taken aback and put on the spot.

I realised (in time thankfully) that it wasn’t the best way for me to respond to someone else’s post recently, so I thought I’d share this example.

The post I was responding to was written by a big influencer in my field – someone that I like to call a friend, but I very much look up them and their amazing expertise. And the last thing I’d want to do is upset them.

So when I found myself tapping out ‘did you know’ in a comment under their Facebook post I went back and changed it. Because I realised that ‘did you know’ is almost a bit combative – and it could sound as if you’re saying ‘didn’t you know?’ – with the implication that maybe they should already have known.

I realised that I could remove any unintentionally aggressive overtones, and make the whole comment feel more relatable if I explained how I’d responded to the information that I wanted to share. So that’s what I did!

I changed ‘did you know that’ into ‘I was amazed when I discovered that’ – which has a totally different energy. It’s still a way of sharing new information, but it doesn’t require a response, and so doesn’t have the same ‘put on the spotness’ about it.

In a different situation, of course, ‘did you know that’ would be perfect – but I’m glad I changed my words that time!

4. Use less obvious opportunities to pay someone a compliment

It’s easy to pay a compliment when someone posts a nice photo on social media. But there are other, more subtle ways to do this too – that will really help if you’re trying to build a relationship with someone.

For example, if you’ve just found out something new that you know the other person would want to know about, you’d probably be tempted to send them a message going “ I’ve just seen/ found/ read this “ I know that’s what I tend to do!

And excitedly sharing something new that you’ve just found out with the whole world with enthusiasm can be a great way to attract others to you –many of us are naturally drawn to high-energy people!

But there may be times when it would be really helpful to take the emphasis away from you being great because you found this info – to making another person feel great instead.

In our example, you can turn the phrase around.

So instead of ‘hey I just found this …..’ you could say ‘I’m sure you’ve already seen this – but just in case you haven’t’ …’.
See how that compliments them on their knowledge, whilst at the same time offering them the new information?

Making people feel good about themselves is great for the world in general – and it’s also good for building networks and communities – so it pays to look for ways of doing this in not-so-obvious way!

There are many other examples of alternative uses of words that I could share, but I hope that these are thought-provoking, whether you agree with me or not!

And on that note – please could you let me know what you think about the examples I’ve shared here in the comments? I’d love to know whether you agree with me and I’d love to hear about examples you’ve seen or experienced where different word choices could have created a different outcome!

We use cookies to ensure that we give you the best experience on our website. If you continue to use this site we will assume that you are happy with it.OkPrivacy policy